Hans Hofmann (1880-1966) is one of the most important figures of postwar American art. Celebrated for his exuberant, color-filled canvases, and renowned as an influential teacher for generations of artists—first in his native Germany, then in New York and Provincetown—Hofmann played a pivotal role in the development of Abstract Expressionism.

As a teacher he brought to America direct knowledge of the work of a celebrated group of European modernists (prior to World War I he had lived and studied in Paris) and developed his own philosophy of art, which he expressed in essays which are among the most engaging discussions of painting in the twentieth century, including “The Color Problem in Pure Painting—Its Creative Origin.” Hofmann taught art for over four decades; his impressive list of students includes Helen Frankenthaler, Red Grooms, Alfred Jensen, Wolf Kahn, Lee Krasner, Louise Nevelson and Frank Stella. As an artist Hofmann tirelessly explored pictorial structure, spatial tensions and color relationships. In his earliest portraits done just years into the twentieth century, his interior scenes of the 1940s and his signature canvases of the late 1950s and the early 1960s, Hofmann brought to his paintings what art historian Karen Wilkin has described as a “range from loose accumulations of brushy strokes…to crisply tailored arrangements of rectangles…but that somehow seems less significant than their uniform intensity, their common pounding energy and their consistent physicality.” 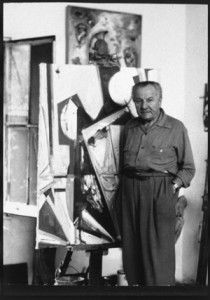