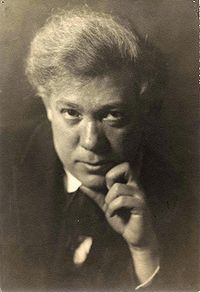 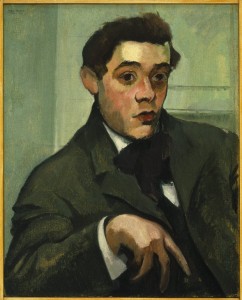 Biography
An early modernist painter known for abstract figurative works, especially in watercolor, Abraham Walkowitz was born in Siberia where his father was a lay rabbi and cantor, who died while ministering in China to Jewish soldiers who had been conscripted into the Russian army.
Fearful of persecution and the possibility of her son being drafted into the Czar’s army when he came of age, Walkowitz’s mother decided to emigrate with her children to the United States. En route across Europe, one of her three daughters died. The remaining family traveled steerage for twenty days across the Atlantic, finally settling in the Jewish ghetto of New York City where mother and son worked long hours at a newspaper stand to support the family.
As a youth, Walkowitz studied the violin and drew continuously in chalk on any surface he could find. His formal art training began at age fourteen at the Artist’s Institute and continued at the National Academy of Design. His studies in life drawing, etching and painting, with concurrent study of anatomy at a Fifth Avenue hospital, resulted in precise, detailed renderings.
He made drawings of ghetto life which were published in local newspapers. To earn money for a trip to Europe, Walkowitz taught art classes and painted signs. When his figurative work was criticized as being too subjective and realistic at a juried Academy exhibition, he perceived the criticism as narrow-minded and became all the more open to the avant-garde ideas he encountered in Europe.
Walkowitz began to use watercolor early in his career, gradually moving from dark, subdued colors and realistic depictions, to fresher, lighter colors following the techniques of the Impressionists. According to biographer William Innes Homer, “Although [Walkowitz] eventually shifted from a figurative style to abstraction, his fine, inventive sense of color prevailed in both modes of painting, and indeed found its freest, most intuitive expression in the medium of watercolor.”
Another biographer, Martica Sawin, observed that while Walkowitz regarded his work prior to 1920 as the most significant period of his art, he continued to paint prolifically into the 1940s when his eyesight began to fail.
He was honored in 1963, three years before his death, by the American Academy of Arts and Letters with an award annually given to a distinguished elderly artist. An account by Kent Smith of the event describes Walkowitz as a small, silky-haired blind man honored by a crowd that “rose to its feet and applauded in thunderous ovation for twenty minutes as the frail figure beamed in obvious delight . . .”