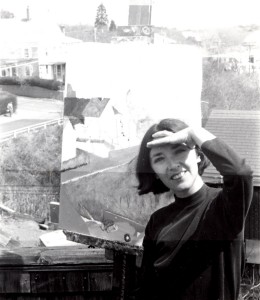 Biography
Artist Sharli Powers Land (1942-’94), once of Provincetown, Cambridge and Philadelphia, died too young, leaving behind her children, a beloved husband, throngs of bereft friends and a brilliant legacy of drawings and paintings spanning some 30 years.

This year marks the 70th anniversary of her birth and, in celebration of her life, her art and her contribution to the Fine Arts Work Center in Provincetown, her family has staged an exhibition of her paintings, drawings and works on paper completed during her time here. Powers Land was a FAWC fellow in 1969-’70 and 1970-’71. From 1971-78, she served on the board of trustees and was visual arts coordinator of the fellowship program. Her commemorative exhibit opened on June 15 at in the Hudson D. Walker Gallery at the Fine Arts Work Center, 24 Pearl St., Provincetown, and runs through July 8.
“I’ve wanted to have a show for my mother for many years but life always seemed too busy,” says Powers Land’s daughter Sharli Sunshine Polanco. “I felt it was time to celebrate as she would have wanted. She always had a show in our house in Philadelphia on her birthday, so this is just an extension of that.”
The family invited Frank Egloff, himself a former fellow from the early 1970s and a longtime friend to curate the show. He selected mostly ink-on-paper drawings, pieces that spoke to him. Polanco adds, “These works are from her time on the Cape because we all thought it important that there should be a connection with the people and the place where the show is being held. The idea is to sell the work and remind people or acquaint [newcomers] with her work. So much work is in storage and I would rather it be on walls where it can be enjoyed. As far as I know, that was my mother’s philosophy as well.”
Sunshine and her older brother Jonas were just young kids during the Provincetown years, but they share certain memories that mirror the joy that their mother’s Cape friends still hold for that time. “It was great having an artist for a mom,” Jonas says. “She was home while we were children. It felt secure to know that she was there and that she was painting. My time in Provincetown and the Cape in general shaped my ideas and ideals about how and where one should live. I remember childhood swims in the ponds, bay and ocean. I remember tooling around the bay with Brandon Milby and friends in a dory made by a friend’s father. I remember amazing picnics where the grownups frolicked and the kids kept pace. I remember ice-skating on the frozen ponds, potluck dinners at FAWC, gardens with food, friends just down the street, selling the Advocate in the [only] two dead-of-winter open bars. I have fond memories of raising hell as a teenager and never feeling like we were not part of a close community. I feel lucky to have had an amazing family, both immediate and extended and spending my childhood in such an amazing place.”
Sunshine adds a humorous touch to her reminiscence: “Life with a mother as an artist meant having to attend the world’s most boring event to a four-year-old — the art opening. Always cheese, crackers and wine. I’ll be bringing juice to this opening so my kids will have something to drink.” In a more serious tone she adds, “It meant parties where ideas were discussed; it meant that whenever my brother or I were sick she would paint us because she knew it was the only time we would stay still. It meant seeing her rejected for shows and still keep painting. It meant painting the interior of every house we ever lived in and having the furniture rearranged every few months. It meant growing up with real original works of art all around us. I did not get any of her artistic gifts except to see the possibilities for materials that others might throw away. To this day I cannot see a cardboard insert in a t-shirt pack without wanting to draw on it. My mother used everything and anything she could get her hands on.”
The opening reception at FAWC was a true reunion, a homecoming celebration of sorts. Poet Keith Althaus captured the essence of this remarkable artist and friend, noting that, “This exhibit is an occasion for joy. For those who knew Sharli Land’s work before, I think this show will confirm their original high opinion of it. And to those to whom it serves as an introduction, may they experience that keen pleasure that comes only at the discovery of a genuine talent. It’s hard because it’s natural, but we shouldn’t lament that one person’s art is cramped into so small a space, so short a time.”