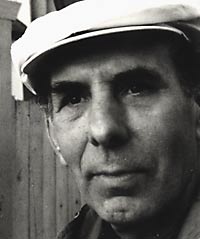 Following in Hofmann’s footsteps, James Gahagan was an accomplished painter as well as a beloved teacher and mentor to others. Inspired by nature, his sensitivity to color relationships and spatial dynamics made him one of the most skillful American colorists.

Born in Brooklyn in 1927, Gahagan claimed that his serious interest in art did not manifest until he was in high school, though some of his earliest memories included selling large scale, hand-drawn renditions of Disney characters to his family members for twenty-five cents.

Gahagan’s ideas about color challenged the accepted norms of the day, even at an early age. Arguing emotionally with a high school art teacher about his use of “invented colors” in a landscape painting, he defended his artistic license: “To me it just seemed the natural thing to do. I just perceived color as beautiful and used it freely, even as I tried to capture the scene I was viewing or imagining.”

Gahagan was one of the many artists in the late 1940s that were able to pursue their studies thanks to the G.I Bill. After serving in the Navy during World War II, he attended Goddard College in Plainfield, Vermont (1947-51) where he studied with two former Hofmann students. He soon moved to New York, where he himself began attending the Hans Hofmann School of Art and became involved with the then-burgeoning abstract movement. His visual vocabulary developed during his years as Associate Director of the Hofmann School and as Hofmann’s assistant during the creation of two major mosaic murals in New York City.

A staunch activist for artists’ rights, Gahagan was a motivating force among his New York contemporaries, acting as a principal organizer and the first elected President of the Artist Tenants Association. In this role, Gahagan led a successful strike by artists to win zoning for artists’ lofts in New York in 1962. This resulted in the establishment of several early artists’ buildings, including the Westbeth, one of the largest artist’s community buildings in the world. In a 1962 article in the New York Times Magazine, the artist spoke for many of his colleagues when he described the artist’s classic battle between a life of financial stability and one of artistic integrity: “It becomes a sort of contest of values… Do we give up our personal freedom and artistic goals and a way of life for job security, a developmental higher salary, Blue Cross insurance policies and a new car? And is it a fair trade? We’ve decided it isn’t. In the end, we feel we have more, not less.”

Gahagan taught painting at Pratt Institute (1965-1971), Columbia University Graduate School of the Arts (1968-1971), and Goddard College (1971-1979), where he became Chairman of the Art Department. He opened the James Gahagan School of Fine Arts in Woodbury, Vermont during the summers of 1971-1974 and was invited to be a visiting artist at Notre Dame University (1978) and at Humboldt State University in California (1989). He was invited to teach at the founding of the prestigious Vermont Studio Center (1984-1999) and in 1991-92 became the resident Artist/Critic at the International Art Workshop in New Zealand.

He has exhibited his work extensively in New York and Provincetown, and has also periodically shown in San Francisco, Los Angeles and Paris. His work is represented in the public collections of the Metropolitan Museum of Art, New York; The Chrysler Museum in Norfolk, Virginia; and the University Art Museum in Berkeley, among others.