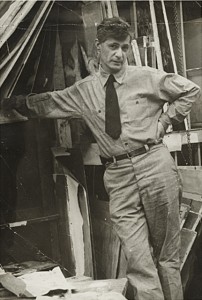 Biography
James Lechay was born in New York, NY on July 5, 1907 to Russian immigrant parents.
He received a degree in psychology from the University of Illinois in 1928 and returned to
New York to study art privately with his elder brother, artist Myron Lechay, but otherwise was a self-taught artist. Lechay taught painting and drawing at the University of Iowa starting in 1945 until his retirement in 1971. He also taught workshops at various other institutions such as Stanford, New York University, and the Skowhegan School of Painting and Sculpture. During the course of his career he received countless medals, awards, and honors for his work. Lechay exhibited with the likes of Mark Rothko, Willem de Kooning, Jules Olitski, Nathan Oliveira, Helen Frankenthaler, and Alice Neel to name only a few. He lived out his retirement in Wellfleet, MA until his death on August 11, 2001 at the age of 94.