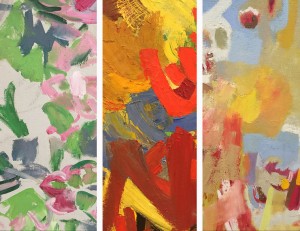 ACME Fine Art’s upcoming exhibition will present the mid-twentieth century Abstract Expressionist work of three artists: Dorothy Eisner, Myrna Harrison and Lillian Orlowsky. Eisner, Harrison, and Orlowsky were among the primary participants in the new modern art movement and witnessed the coalescence of the New York School. Orlowsky studied with Hans Hofmann in the early days of his school in New York and Provincetown. Harrison studied with Hofmann, Tworkov and Guston, and Eisner studied with Jack Tworkov. All three exhibited their work at an early cooperative gallery in Manhattan called the James Gallery. These three women operated at the center of the New York Abstract Expressionist movement, and took that mode of expression with them as they traveled to Provincetown, Maine and beyond. Side by side, their work illuminates how three artists took unique ownership of the movement’s bold new energy.

Dorothy Eisner (1906-1984) had already established a career for herself as an artist long before she was introduced to Abstract Expressionism. In the 1950s, in the midst of painting in Montana, Eisner returned to New York to study with Jack Tworkov, one of the founders of the New York School. Eisner found his training compelling, and remarked “Abstract Expressionism made me think differently. I learned from it a language of shapes and color that I was not conscious of when I was young.” Her paintings from this period exhibited at ACME harness the bold, fast brushstrokes of Expressionism to capture her experience in the Montana landscape. These expansive, immersive compositions are the most fully abstract of all Eisner’s work.

From that point on, Eisner incorporated the Abstract Expressionist mode into her personal aesthetic as she returned to the subject matter that had captured her attention at the beginning of her career: people. Mary Ann Caws, an art historian and literary critic, remarked in her remembrances of Eisner at Cranberry Island that Dorothy “never lost sight of who’s in charge.” She astutely adapted the new mode of expression to her personal vision, creating energetic and inviting images of the people and places that surrounded her.

Myrna Harrison (b. 1932) came to Abstract Expressionism much earlier in her life as an artist. Her family moved to New York in 1943 and, after a brief stint at the University of New Mexico, she returned to the city and entered into the world of Abstract Expressionism. She studied with Morris Davidson and Jack Tworkov, and, following that, Hans Hofmann. She lived and worked in a studio at 713 Broadway along with artists Robert Henry, Haynes Ownby and Charles Littler. Her paintings of these years, as Robert Henry remarked, “Are very much of the time, the 1950s, and the place, New York.” Despite this, Harrison always maintained a unique voice in her work, an independence fully realized in the mature works that are the focus of ACME’s upcoming exhibition. A selection of these confident and riotous paintings were included in Harrison’s 2012 show at the Provincetown Art Association and Museum, where art critic Sebastian Smee observed that they “achieve just what Hofmann was trying to teach: the creation of forceful spacial tensions through contrasting colors and painterly textures. The best have canting angles, zigzags and striated parabolas that evoke the surging forces of nature.”

Lillian Orlowsky (1914-2007) also studied closely with Hofmann, and overlapped with Harrison during her time at the Days Lumberyard Studios in Provincetown. Orlowsky began studying with Hofmann in 1937, the same year that she entered into the WPA, which only accepted a limited number of abstract artists (and an even more limited number of women). Through the school and the WPA, Orlowsky met and exchanged ideas with other prominent Abstract Expressionists. To hear her tell it, Orlowsky studied with Hofmann “for a lifetime.” She recounts that he taught her to “experience what I see and transform it on a two-dimensional plane, this three dimensionality.” The paintings from the 1950s included in this exhibition demonstrate how well Orlowsky adapted Hofmann’s teachings and achieved her aim. They play with a diffuse sense of depth and movement, with areas of color applied freely over the canvas.

Orlowsky dedicated much of her life to championing the work of her fellow artists and teachers, but maintained a striking independence in her own work. Somewhat belatedly, her work has come to find its own champions. Since her first solo show in 1985, Orlowsky’s work has been the focus of ten additional solo exhibitions. In this group show ACME hopes to further illuminate her distinct achievements alongside those of her contemporaries.

Eisner, Harrison, Orlowsky will be on display in ACME Fine Art’s gallery at 450 Harrison Avenue from 29 January through 12 March 2016. An Opening Reception will be held at the gallery on Friday, 5 February 2016 from 5:00 to 8:00 in the evening. In addition, the gallery will be hosting a special Gallery Talk on Saturday, 20 February at 2:00 pm, featuring a panel that will include Myrna Harrison; Christie McDonald, author of Painting My World: The Art of Dorothy Eisner and Christine McCarthy; Executive Director of the Provincetown Art Association and Museum. The event is open to the general public at no charge. The exhibition will also be viewable on the gallery’s website: www.acmefineart.com. For more information about the exhibition and featured artists, please contact the gallery at info@acmefineart.com or 617.585.9551.