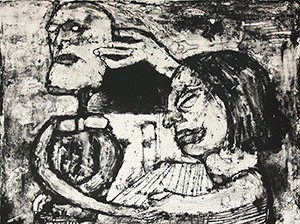 On 15 April 2016 ACME Fine Art will open a new online-only exhibition of lithographs by George McNeil. Today McNeil is well recognized as one of the few true first-generation Abstract Expressionist painters. However, McNeil’s legacy in modern art began long before his participation in the advent of the New York School.  Among his other early noteworthy accomplishments, McNeil was one of the founders of the American Abstract Artists group in 1936, and in 1939, McNeil was one of only five non-objective artists whose work was selected for the New York World’s Fair exhibition.

The artistic training McNeil received set him up well for these early accomplishments. His studies at the Art Students League (from 1927-1932) introduced him to Vaclav Vytlacil, Jan Matulka, and most importantly, Hans Hofmann. McNeil became closely associated with Hofmann during this period and from 1936 to 1937 McNeil acted as Hofmann’s class monitor, official assistant, and unofficial interpreter of Hofmann’s theories. (An often-repeated story about McNeil’s role as interpreter is that when Lee Krasner was asked what she thought of Hofmann’s theories, she responded that she could not say, because all she really understood was McNeil’s version.) The collegial atmosphere of the Hofmann School helped foster his lifelong friendships with artists such Giorgio Cavallon, Mercedes Matter, John Opper, William Freed, Lillian Orlowsky, and Rae Eames. Similarly, McNeil’s participation in the Federal Arts Project in the 1930s led to associations with Burgoyne Diller, Willem De Kooning, and James Brooks.

In the late 1940s, McNeil joined the Charles Egan Gallery in Manhattan, which was one of the first galleries in New York to feature the work of Abstract Expressionist artists. During this time, Egan was also showing the work of Willem De Kooning, Franz Kline, Giorgio Cavallon, Philip Guston, and Robert de Niro Sr. In 1950, McNeil had his first of four solo exhibitions at the Charles Egan Gallery. Since that time McNeil’s work has been widely exhibited in galleries, private collections and museum venues alike. McNeil’s work is now in the permanent collections of the Metropolitan Museum of Art, the Museum of Modern Art, the National Gallery of Art, the Whitney Museum of American Art, the Brooklyn Museum of Art, and the Corcoran Gallery of Art.

McNeil started printmaking in the late 1960s. While he came late to the craft of lithography, he quickly became adept and made the process his own. Of his foray into printmaking, and those of other painters, McNeil once offered the following remark: “I think that ignorant anxiety is what helps [painters] get life into the plate or stone…Use the craft to make art, not the other way around.”

The lithographs to be included in the exhibition at ACME demonstrate the accuracy of this statement: all have the fervent energy that also appeared in McNeil’s paintings of the period.  The exhibition focuses on lithographs produced in the 1970s and 1980s, when figuration had returned to play a prominent role in McNeil’s work.  McNeil himself observed an important relationship between his printmaking and the evolution of his painting. Lithography, he observed, “contributed to the reinforcement of subject matter” in his work.

The majority of works included in the exhibition feature individual or pairs of figures that investigate the psychological issues in which McNeil was so interested in during this period.  “Cigaret Head,” which will appear in the exhibition, is an excellent example of McNeil’s approach to printmaking in the in 1970s. This lithograph was also included in the Montclair Art Museum’s exhibition of McNeil’s prints and demonstrates McNeil’s painterly command of the printmaking process. The skull like figure is defined in black, with an almost imperceptible dark blue that appears along the jaw line, lips and right eye. The surface of the face itself is modulated with various splashes of diluted ink that carry the freedom and energy of McNeil’s painting. In her review of the Montclair exhibition in 1991, Vivien Raynor, a critic for the New York Times, called these monotone prints “dazzling”.

The online exhibition will be viewable starting on 15 April 2016, on the ACME Fine Art website. For more information please contact the gallery at info@acmefineart.com or 617-585-9551, or visit acmefineart.com.