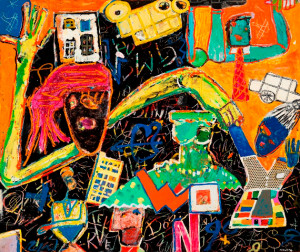 For ACME Fine Art’s first exhibition of the 2015 season Gallery Director David Cowan will present the gallery’s sixth solo show of oil paintings by 20th century expressionist master George McNeil. The exhibition will open at ACME Fine Art’s SoWa gallery on Friday, 9 January 2015. A reception will be held from 5:00 to 8:00 p.m. on 6 February in conjunction with SoWa’s First Friday of February celebration. The exhibition will be comprised of a group of 18 landscape inspired paintings from the estate of the artist that date from between 1955 and 1990. The works range from small, highly abstract panels that were painted en-plein-air at the height of the Abstract Expressionist Movement, to monumental mixed media studio paintings that McNeil made from the beginning of the Figurative Expressionist Movement—mid-century through the late 20th century—as part of what later became known as the Neo-Expressionist Movement. The exhibition will be on view through Saturday, 21 February 2015. Exhibition catalogues will be available through the gallery.

George McNeil was a true pioneer of American modern art. Today he is recognized as one of the few true first-generation Abstract Expressionist painters. It should also be noted, however, that McNeil’s legacy in modern art began long before his participation in the advent of the New York School.  Among his other early noteworthy accomplishments, McNeil was one of the founders of the American Abstract Artists group in 1936, and in 1939 he was one of only five non-objective artists whose work was selected for the New York World’s Fair exhibition.

McNeil got his start as an artist as early as 1922 when—while still a teenager—he attended art classes at the Brooklyn Museum. Thanks to seminal exhibitions that he viewed at the Brooklyn Museum of their Societe Anonyme collection and others at the Metropolitan Museum during the 1920s, McNeil became an ardent admirer of the work of Picasso, Matisse, Duchamp, and Picabia. Between 1927 and 1932 McNeil’s studies at the Art Students League introduced him to Vaclav Vytlacil, Jan Matulka, and most importantly, Hans Hofmann. McNeil became closely associated with Hofmann during this period. In 1936 and 1937 McNeil acted as Hofmann’s class monitor, official assistant, and unofficial interpreter of Hofmann’s theories. (An often-repeated story about McNeil’s role as interpreter is that when Lee Krasner was asked what she thought of Hofmann’s theories, she responded that she could not say, because all she really understood was McNeil’s version). The collegial atmosphere of the Hofmann School helped sponsor his lifelong friendships with artists such Giorgio Cavallon, Mercedes Matter, John Opper, William Freed, Lillian Orlowsky, and Rae Eames. Similarly, McNeil’s participation in the Federal Arts Project in the 1930s led to associations with Burgoyne Diller, Willem De Kooning, and James Brooks.

After earning his Doctorate in Education from Columbia University in 1943, McNeil served in the U.S. Navy during World War II. His distinguished teaching career began with a two-year post at the University of Wyoming following the war, after which he accepted the Directorship of the Pratt Institute Evening Art Program. As Director, McNeil was responsible for bringing Franz Kline, Philip Guston, Reuben Nakian, and other noteworthy artists in to teach classes. McNeil served on the faculty at Pratt from 1948 until 1981. During his tenure at Pratt, McNeill also taught at the University of California at Berkeley in 1956 and 1957, and at the New York Studio School of Painting, Drawing, and Sculpture from 1966 to 1981.

In the late 1940s, McNeil joined the Charles Egan Gallery in Manhattan. Egan was one of the premiere galleries in New York to introduce the work of Abstract Expressionist artists. During this time, the Egan stable included Willem De Kooning, Franz Kline, Jack Tworkov, Giorgio Cavallon, Philip Guston, and Robert de Niro Sr. In 1950 McNeil had his first of four solo exhibitions at the Charles Egan Gallery. Since that time McNeil’s work has been widely exhibited in galleries, in private collections, and in museum venues alike. Some of the highlights include: participation in group exhibitions at the Art Institute of Chicago (1947), Museum of Modern Art (1951, 1959, 1969, 1985), the Whitney Museum of American Art (1957, 1961, 1965, 1988) Solomon R. Guggenheim Museum (1961), and the Pennsylvania Academy of Fine Arts (1962, 1966). Today, George McNeil’s work is in the permanent collections of the Metropolitan Museum of Art, the Museum of Modern Art, the National Gallery of Art, the Whitney Museum of American Art, the Brooklyn Museum of Art, and the Corcoran Gallery of Art.

ACME Fine Art’s 2015 exhibition of landscape inspired paintings by McNeil starts with paintings made during Abstract Expressionism’s heyday, the 1950s. His work from the ‘50s is characterized by his signature use of multiple layers of thick impasto with interlaced textural bands and surface areas of heavy pigment. These canvasses are the boldly colorful, spontaneously conceived, emphatic, artistic statements by an artist who had found his natural expressionist’s voice. In short, they constitute classic, New York School, Abstract Expressionism. From mid-decade on, many of the painting titles take on place names, such as Antietam, Illyria, and Tharsus, and they seem to evoke the ethos of the places after which they are named.

This was the period that brought McNeil’s work the serious critical attention that it deserved. He had excellent gallery representation at mid-century, and his work was exhibited regularly, first at Egan (until 1954), then at the Poindexter Gallery (through 1959), and later on at the Howard Wise Gallery (1960-1967). It should also be noted that his work was regularly reviewed by such publications as Time Magazine, the New York Times, and Art News, and by writers such as Thomas Hess, Barbara Rose, Clement Greenberg, William Seitz, and Irving Sandler.

The decade of the 1960s was an important period of transition for McNeil. In the early 1960s his forms—while still equally textural, rich, and complex—in many cases carried figural as well landscape associations. Frequently the titles of these paintings—such as Pamplona, Bosra, or Rhoda—echo this transition. McNeil made several trips abroad in the ‘60s and began to experiment with making plein-air landscapes at sights where important Impressionist landscapes had been painted. Of course, McNeil’s versions bear no resemblance to his predecessors’. Instead, as demonstrated in paintings like Les Bruyeres, and Le Raincey, they are boldly colorful, raw, spontaneous, unedited, utterances in thicker than thick oil paint. Modest in size, each of them captures a moment while packing a visual wallop.

This was a pivotal decade for McNeil during which the figure emerged and became identifiable. By the end of it, the figure had become more fully sensate in McNeil’s work; nonetheless, the expression remained an abstract vehicle used by the artist as an additional tool in his visual language. These evocative transitional works, including Ballet Dancer #8 and Bather #25, led the way to the emotionally charged Neo-Expressionist canvasses that became McNeil’s hallmark in the 1970s, ‘80s, and ‘90s.

George McNeil’s late century, riotously expressed Neo-Expressionist works complete the exhibition and they demonstrate a culmination of McNeil’s artistic prowess. In paintings such as Now Street #2, 89 West 6th Street, and St. Marks Place, McNeil integrates figurative expression with a gritty urban landscape, successfully capturing a fully realized synthesis of his creative ambition, while also conveying an indelible rendering of both time and place.

ACME Fine Art is located at 450 Harrison Avenue in Boston’s SoWa Arts District, and is open from 11:00am to 5:30pm Tuesday through Saturday. GEORGE McNEIL: ABOUT PLACE will be on view at the gallery from 9 January through 21 February 2015. It will also be on view online at www.acmefineart.com.